Your cart is empty.

How did the adult coloring craze start anyway? It started out as the British Invasion, spread across the Channel to become the French Revolution, and has experienced epidemic growth in the United States. Fortunately this does not refer to war, or the 60’s musical style of the Beatles and the Rolling Stones. We are talking about coloring books here….coloring books for Adults. That’s right – Adults.

When Scottish artist Johanna Basford released her amazing coloring book for adults in 2011 “Secret Garden: An Inky Treasure Hunt and Coloring Book” (Laurence King Publishing), who would have believed it would sell close to six million copies worldwide and become a global best-seller? And when French publisher Hachette Pratique released “Art-thérapie: 100 coloriages anti-stress” in 2012, could they have envisioned their adult coloring book would sell more than three and a half million copies worldwide?

With the help of Social Media, the Adult Coloring Book Craze has leaped across the ocean and onto Amazon’s Best-Seller list here in the United States. Fueling this phenomenon is the modern day adult’s need to Relax, Renew and Revisit Childhood. Baby boomers and adults of all ages find themselves today in the most fast-paced, constantly changing environment in the history of civilization. Is it any wonder that pharmaceutical companies and the medical profession in general have focused so greatly on stress and anxiety related illnesses over the past decade? And then comes along a stress reducer that is fun, low-cost and a remarkable therapy for children of all ages.

I once heard my 88 year old father, who still whips me on the tennis court say that his secret to great health and longevity is in not knowing how old he is. ‘I may grow older but I’ll never grow old’ has been his mantra for the past 30 years. He lives his mantra and in addition to solving cross-word puzzles, walking, tennis and wood-working, dad spends a lot of time drawing and coloring. A child at heart, a man that revisit’s childhood frequently and has remained forever young. Coloring isn’t just for the young in age anymore, but for those who seek to remain young in body, mind and spirit.

Phyllis Harris is the illustrator of over 35 children’s books and a lover of all things childhood. Throughout life, her place of peace and solitude was a return to childhood; a remembrance of simpler times. Joy filled days spent relaxing in a field of dandelions, riding a horse through sun-ripened fields of wild flowers and playing fetch with her best four-legged friend. Capturing the heart of childhood became her illustrative style in creating art for children’s books. Experiencing changes in children’s publishing 4 years ago, like many other artists and illustrators, Phyllis realized the need to reinvent herself and her business. Phyllis began focusing on creating wall art for Children’s Rooms and launched Phyllis Harris Designs in 2012. With a passion for illustration, and her love of childhood, Phyllis Harris Designs has experienced remarkable success. With her illustrations adorning thousands of children’s rooms across 6 continents, customers began asking Phyllis in early 2015 if she would consider publishing a collection of her illustrations into an adult coloring book. And that is how ‘the heART of Childhood’ was born.  Now heading into its 3rd printing in 6 months, “the heART of Childhood: A coloring book featuring the timeless art of Phyllis Harris” has garnered international success and has exceeded any expectation the artist had early on. This is just one Midwest U.S. artist’s story; and the story of many successful artists and illustrators in the United States and Europe.

When and where will the adult coloring book craze end? The answer may just be, never. Because the need to Relax, Renew and Revisit childhood will never grow old. And like my father, millions of others have found that it’s better to grow older, but never grow old.

Something FREE and a discount too!

Not all of us celebrate Valentine's Day, but why not treat yourself with a little something sweet? Or share the love with others? Especially for you, my blog readers, I am offering a discount. Use the code: Sweet15 to receive 15% off all orders.

In case you missed it in the last newsletter I am also offering a FREE coloring page to download!  Color it and create your own Valentine card or color it just for fun! 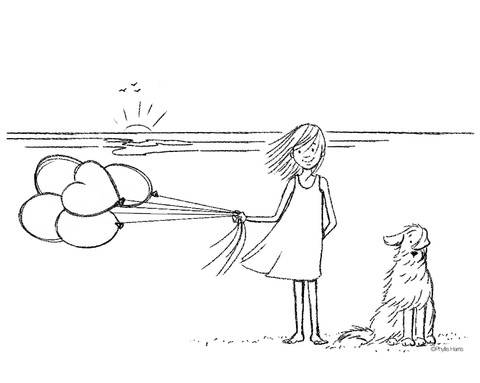 I created some DIY  Valentine's post cards to color. And if you enjoy the act of coloring, I have a set of 4 of my best selling images as post cards to color as well. These are limited in supply as I print them and create them all myself.  Or if you have little one's in your life, why not share my 2 in 1  Coloring and Story Book, The Adventures of Brandy and Emma. (NOTE: the 15% discount does not apply to the coloring book as it is distributed through Amazon in the US, CA, UK and in Europe)

The necklaces you see are also all handmade with love. The include my own original art in the pendants and I hand stamp the charms, too. 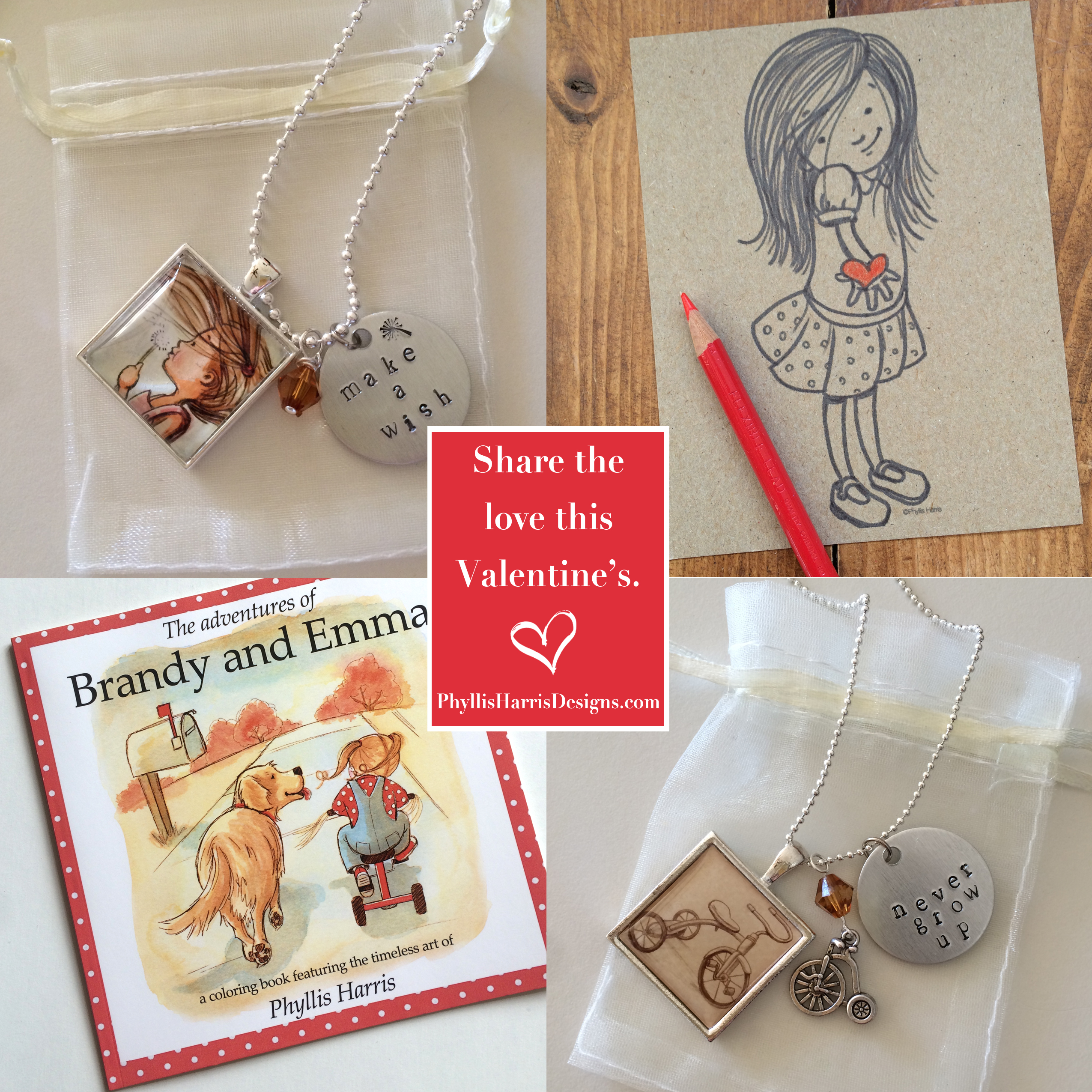 As always, thank you for being a part of our wonderful community. I am so grateful for each and every one of you!

Wishing you all a wonderful ♥'s day!

Phyllis Harris Designs & You – Giving the gift of love and healing

Be sure and follow my social media networks to keep up with all that is going on. Here are the links:

How I got into publishing coloring books for adults

Hi friends! Just a little about me how I got into publishing coloring books for adults.

I have been working in children's publishing as an illustrator since 1999 but as the publishing industry began to change almost 4 years ago I decided to start selling my artwork in an online store first on Etsy(https://www.etsy.com/shop/PhyllisHarrisDesigns) and now I also sell on my own website at http://phyllisharrisdesigns.com as well as on Amazon. When coloring books for adults began to really pick up in popularity I felt it was an easy transition for me to make so I published 3 coloring books thus far and all of them are offered on Amazon in the US, CA, UK and in Europe. The are titled, "the heART of childhood", "Seaside Memories" and "The Adventures of Brandy and Emma". Here is a peek at all the covers.